THE OTHER ASIAN TIGER 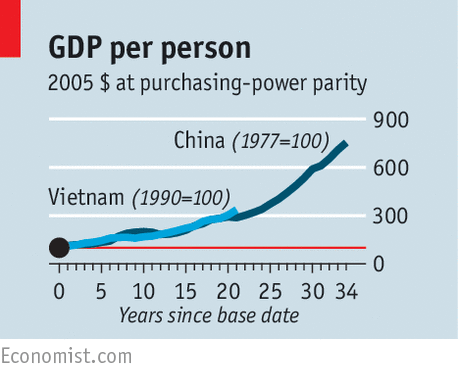 WHICH Asian country has roared ahead over the past quarter-century, with millions of its people escaping poverty? And which Asian economy, still mainly rural, will be the continent’s next dynamo? Most would probably respond “China” to the first question and “India” to the second. But these answers would overlook a country that, in any other part of the world, would stand out for its past success and future promise.
Vietnam, with a population of more than 90m, has notched up the world’s second-fastest growth rate per person since 1990, behind only China. If it can maintain a 7% pace over the next decade, it will follow the same trajectory as erstwhile Asian tigers such as South Korea and Taiwan. Quite an achievement for a country that in the 1980s was emerging from decades of war and was as poor as Ethiopia.
Unlike either China or India, Vietnam lacks the advantages of being a continent-sized economy, so the lessons of its rise are more applicable to other developing countries, especially those nearby. It is also a useful counter to techno-pessimism. The spread of automation in factories has fuelled concerns that poor countries will no longer be able to get a lift from labour-intensive manufacturing. Vietnam shows that tried-and-tested models of development can still work.
Most obviously, openness to the global economy pays off. Vietnam is lucky to be sitting on China’s doorstep as companies hunt for low-cost alternatives. But others in South-East Asia, equally well positioned, have done less. Vietnam dramatically simplified its trade rules in the 1990s. Trade now accounts for roughly 150% of GDP, more than any other country at its income level. The government barred officials from forcing foreigners to buy inputs domestically. Contrast that with local-content rules in Indonesia. Foreign firms have flocked to Vietnam and make about two-thirds of Vietnamese exports.
Allied to openness is flexibility. The government has encouraged competition among its 63 provinces. Ho Chi Minh City has forged ahead with industrial parks, Danang has gone high-tech and the north is scooping up manufacturers as they exit China. The result is a diversified economy able to withstand shocks, including a property bust in 2011.
At the same time Vietnam, like China, has been clear-minded about the direction it must take. Perhaps most important has been a focus on education. Vietnamese 15-year-olds do as well in maths and sciences as their German peers. Vietnam spends more on schools than most countries at a similar level of development, and focuses on the basics: boosting enrolment and training teachers. The investment is pivotal to making the most of trade opportunities. Factories may be more automated, but the machines still need operators. Workers must be literate, numerate and able to handle complex instructions. Vietnam is producing the right skills. Thailand, Indonesia and Malaysia lag behind, despite being wealthier.
Mekong, you follow
Now a middle-income country, Vietnam faces a steep ascent to the high-income ranks. The Trans-Pacific Partnership, a 12-nation trade pact meant to be a boost, may well be blocked by America’s inward turn. State-owned enterprises (SOEs) are bloated. Competing provinces, long a benefit, are a liability when they duplicate infrastructure. Vietnam has struggled to build a domestic supply chain. Moving up in value will be hard when China’s grip on high-end output is tightening. The repressive, one-party system of government is brittle.
But Vietnam’s past quarter-century means that it has a decent chance of prevailing. It is at last starting on SOE reform. It is negotiating trade deals in Asia and with Europe. And it is drafting plans to increase its domestic share of manufacturing without scaring off foreigners. Vietnam is a model for countries trying to get a foot on the development ladder. With luck, it will also become a model for those trying to climb up it.
http://www.economist.com/news/leaders/21703368-vietnams-success-merits-closer-look-other-asian-tiger
Posted by Meo Meo at 3:15 PM No comments: